More Than a Bucket of Bolts

September 13, 2022
Next up on my journey through solo rpg space is a little zine called Bucket of Bolts (buy it here), where you take on the POV of medium sized spacecraft, and explore its journey through time and space, cataloging adventures, upgrades, and a timeline of several Captains that have the privilege of being at the helm. It's based on another rpg called Artefact (in which you write from the POV of a sentient magic item or weapon). I had enjoyed Artefact before, so I was excited to try this one out. 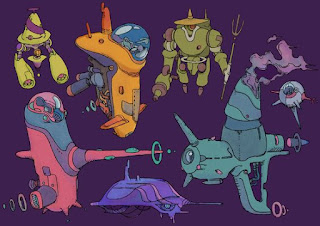 Source: abduzeedo
The game starts with you describing your ship; writing about some basic details like the type of ship, the model and make, the crew who designed and built it, as well as some defining traits like if it's sleek, or powerful, or intimidating.
My particular ship for this game was nicknamed Ladybug, and was the mid-range value model of Hyperion Industries called the Prospect-QX. Sporting the same engine and basic design as their flagship luxury spaceship line, the Prophecy, the Prospect didn't quite have all the bells and whistles (no phaser array, no sonic resonance fields, and no secondary plasma emitters), but it did have the same safety and fuel economy that the company is known for, in a more affordable package for the everyday consumer. 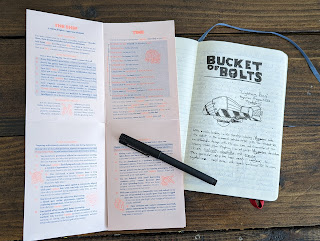 Our journey begins with the brand-new Hyperion Prospect-QX aka "Ladybug"
Next up you get to describe the first Captain of your ship, choosing from a variety archetypes like an Intelligence Officer or Renowned Mercenary. The game is actually broken up into three Acts, each of which gets its own pool of Captains to choose from to ensure a rich and varied history of owners for your ship. The Ladybug's ownership history had a colorful cast of characters including one Feelee Baxton, a political prodigy and one of the first bi-sentients ever elected to Supreme Senate, as well as Jatt Xolo, a charming scoundrel who was savvy, roguish, and touted a rather large bounty on his head (that he would brag about to woo the ladies on occasion).
As you write about each Captain, you have a chance to answer some questions both about how the Captain used the ship, and how the events that that particular Captain made lasting changes to the ship. Maybe there was some secret modification that they never had a chance to use before someone else came into ownership, or a particularly hairy situation left the ship damaged and it never quite handled the same after that, even if all repairs were made to specification. 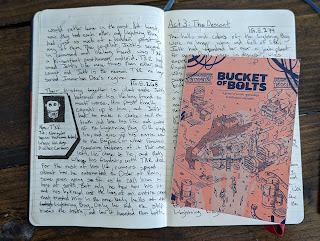 A little data-node about the Ladybug's navigator during Jatt Xolo's era, the infamous post-bi-sentient android, TXR.
In one particularly eventful Era, the Ladybug underwent quite a transformation itself. About fifty years after her manufacture date, Ladybug came under ownership of a brash hotshot racer named Ace Hardlight. He gutted her and completely transformed the craft into a hot rod racer that would cross galaxies in a blink of an eye (or so he claimed). Upgrades like replacing all bearings and fittings with tetra-carbon plasteel, or installing a Bernouli warp drive, or even delta-wave fragmenter arrays. The upgrades were so severe, he even renamed the ship. He dubbed our sweet little Ladybug the Lightning Bug, to reflect how much horsepower and oomph she now hid under the hood.
Between each Captain, the game asks you to Rest for a few seconds or a few minutes between entries. How long you choose to rest reflects the passage of time in-game, giving you a valuable mental break to be able to reflect on events that have transpired, and really meditate on they might leave lasting changes on your ship, as well as the direction things might be heading in the future. Over time, the galaxies can undergo just as much change. One fun prompt I ran into was a powerful militant faction taking control of civilized space. The first decree of the evil Immortan Dax, head of the Empire, was to ban racing. So of course, Lightning Bug, helmed by one Ace Hardlight toppled that Empire and lead a revolution, one illegal race at a time. (Don't ask about the details, it just works okay?). 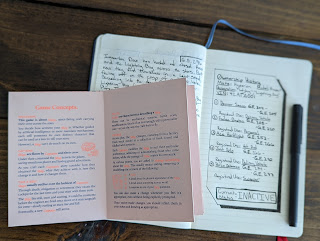 Maintaining a full ownership history increases the value and likelihood of being able to find another seller in the secondary spacecraft market.
Decades later, in her final act, the Lightning Bug limps along slowly with phantom pains of lights or subsystems flickering for no apparent reasons, exposed wires, and deflector-plates slightly bent or unaligned. She wears her history on her shoulders, and each scrape and dent a story on its own. Her final owner, a junk-spacesweeper named Porco has just as many wrinkles on his brow as our dear Lightning Bug has scratches on her hull. As you move through the Shifts & Currents or Dust & Rust (tables the game offers as inspiration for markers of time past), what you have left as you come to the end is a ship's history teeming with life and interesting stories. This particular story found Porco and Lightning Bug sharing a last few moments together before finding a final peace in the beautiful inky vastness of space.

I had a lot of fun with this game, truly picturing how each Captain shaped the craft and experienced things the next Captain would never know, but feel every lasting memory of as they helmed the ship and made their own. I'll definitely be revisiting this one and seeing what other kind of legacies I can create.
4 Dysonium Crystals out of 5. Would ship again. You can pick up a copy here.

Popular posts from this blog

March 10, 2019
Knave is a rules-lite tabletop rpg written by Ben Milton of Questing Beast  (and available here ). It's OSR compatible, incredibly easy to teach, and even easier to run. Between reading its seven-page rulebook, and rolling characters, you and your players will be dungeoneering and adventuring within minutes. For starters, it's a fairly standard d20+mod roll-over system (as in, roll higher than a target number). If you're experienced with Dungeons & Dragons 5e or Pathfinder , more than anything you're going to be spending more time unlearning  things than having to learn anything new. What I loved For being so lightweight, it's actually pretty hard to pick a feature that I love the most. Every mechanic and rule within the book has purpose and weight, and is balanced well within the system. Things just make sense. Each of its six traditional ability scores (Strength, Dexterity, Constitution, Intelligence, Wisdom, Charisma) share equal importance so there&#
4 comments
Read more

March 06, 2019
Knave is a great chassis of an rpg for modding and hacking, and it seems that the first thing that most game designers see is a need for class customization in an otherwise classless system. I'm no different. Here's a stab in the dark at trying to add a little more character customization. Knacks As characters level, they reveal themselves to either have obtained or show a natural knack for different aspects of dungeoneering. At levels 3, 6, and 9, instead of increasing three abilities by one point, they increase a single ability by one point and roll on one of the following tables. (I guess your players can pick one if they want, but rolling is usually more fun, and that's what matters).  Fighting       +1 boon on attack rolls        +1 boon on stunts        Deal damage equal to your Strength on a successful stunt       Ignore losing 1 point of quality on armor or extra damage when an attacker rolls a 20 (or you roll a 1 to defend).       When wielding tw
Post a Comment
Read more

Lichdom - A Reflective Ascent to Power

September 12, 2022
I recently sat down and resolved to start tackling the mountain of rulebooks and rpgs that seemed to be growing by the week before me. That, paired with a sort of terse relationship with video games at the moment, lead me to tackle some of the solo roleplaying games that I had begun to subconsciously collect. I had played one or two before, most notably the famous and award-winning Thousand Year Old Vampire , which was a surreal experience at the least (and a profoundly introspective jaunt at its best).  Source: Dungeon Crawl Classics (seriously great game, check it out too) This week I decided to try one of the newer ones I had picked up: Lichdom (buy it here) . Thanking the past version of me that had the foresight (or the money burning a hole in my digital wallet) for backing the Kickstarter that came with the hardcover and a custom deck of themed playing cards, I cracked open the cards, uncapped a new pen, and creased the spine of a brand new journal to start playing.  Lichdom is
Post a Comment
Read more

Steal everything you see here.