Lichdom - A Reflective Ascent to Power

I recently sat down and resolved to start tackling the mountain of rulebooks and rpgs that seemed to be growing by the week before me. That, paired with a sort of terse relationship with video games at the moment, lead me to tackle some of the solo roleplaying games that I had begun to subconsciously collect. I had played one or two before, most notably the famous and award-winning Thousand Year Old Vampire, which was a surreal experience at the least (and a profoundly introspective jaunt at its best). 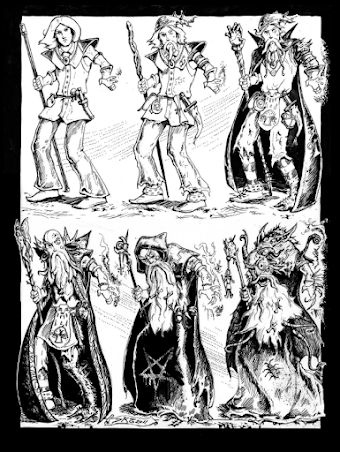 This week I decided to try one of the newer ones I had picked up: Lichdom (buy it here). Thanking the past version of me that had the foresight (or the money burning a hole in my digital wallet) for backing the Kickstarter that came with the hardcover and a custom deck of themed playing cards, I cracked open the cards, uncapped a new pen, and creased the spine of a brand new journal to start playing.

Lichdom is a solo journaling experience where you take on the role of a wizard, or if you prefer any other spellcasting title like shaman or sorcerer or mage that's fine. Whatever moniker you adopt, your goal in this game is the same: achieve immortality through an ancient and dark ritual in hopes of becoming a Lich. The ritual itself involves obtaining a mix of Arcane or Mundane Truths about the universe, and applying all that you've learned, any companions or enemies you have accrued over time, and possible influence you have in your fictional world, and rolling the dice against fate, literally. 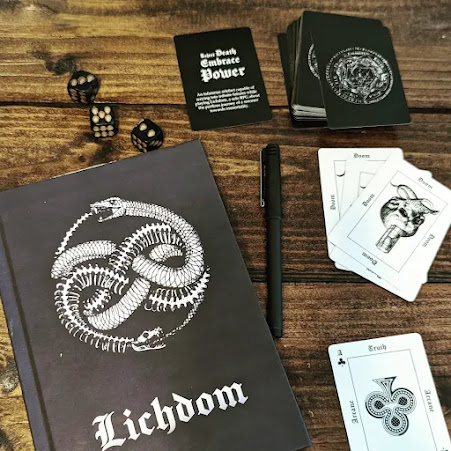 Hardcover Edition of Lichdom, custom deck of cards via Kickstarter, skull embedded dice, and one of my favorite pens.

There's a little more "game" involved with Lichdom than some other solo rpg / journaling game exercises, which afterwards I highly appreciated. Some other games ask you to "find a way to write an ending" or "conclude the events as you see fit" whereas with this game, you have a concrete objective you are working towards, and the events that have transpired and challenges you face directly affect your ability to tackle that last ritual. If you succeed, then your character has done the impossible and achieved immortality. But if you fail, you risk dying a horrible death and being lost to the sands of time in Ozymandian fashion, or even a mix of results in between. 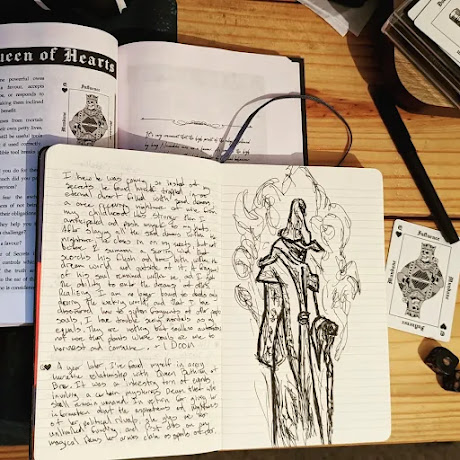 The hopeful Lich Iosef, once an orphan to murdered parents, abandoned by his siblings, and swore never to hunger for food again, only knowledge and power.

One of the things that first caught my eye as I began this game was that there were only two stats to keep track of: Resolve and Doom, which are both related. If your Resolve ever reaches 0, the game ends with Fate mocking you from beyond the pale. Doom can be incurred through a number of ways, most frequently by your own hand as you push your luck and take on dark and corrupting powers to succeed at various Challenges throughout the game.

Events and Challenges are represented by numbered cards, and each one has a table of unique prompts and descriptions to get your creative juices flowing. Events grant you the opportunity to flesh out the world or your character's interaction with it, whether it's their ascent to power or their descent into madness, or some eldritch combination of the two, the choice is yours. Challenges however, are particularly difficult moments that you have to roll dice against to succeed or fail, incurring either loss of Resolve or a chance to incur more corruption, and you must describe the incident based on that roll in as little or as much gory detail as you desire. 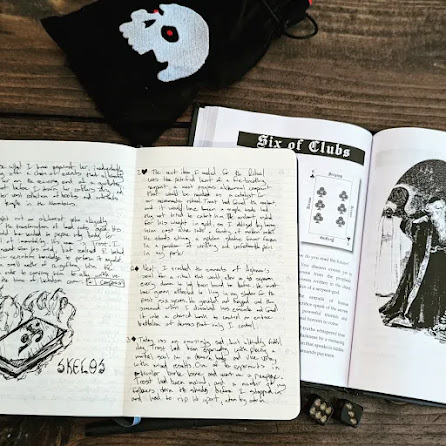 The legendary Book of Skelos, which contains profane rituals and arcane Truths of the universe. Stolen from a Holy Order of Sword Saints, and an integral step of the ritual that would grant Iosef Lichdom.

There are a variety of other types of resources as well, represented by the face cards. Influence and Companions are cards that you can keep and use as resources to help you in future challenges or the final ritual, granting a bonus on the actual roll, while representing relationships you foster in the fiction. Naturally, as the story progresses, you'll make Enemies which can stick around and give you negatives or banes on future rolls. Some cards act as Scrying or Scheming, which allows for manipulating the deck for a cost, representing your wizard's machinations as every step they take is a chess strategem moving towards their ultimate goal of immortality. 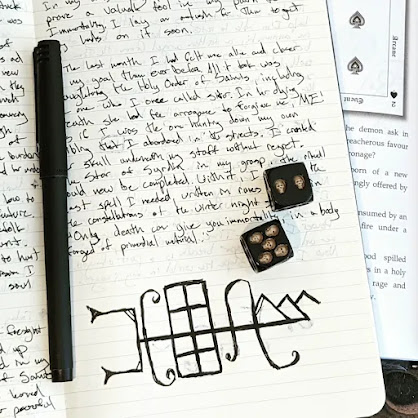 After decades of manipulating a warmongering queen, employing a morally ambiguous alchemist, and amassing a fleet of pirates, Iosef finally has the last piece of eldritch knowledge to complete his goal.

And finally, there's the truth. Or Truths rather, which are represented by the deck's Aces. A minimum of two Truths is required to begin the ritual. The final ritual, however, is quite a challenge however, in that you need to roll over a certain amount to not have your soul torn asunder by supernatural powers, and each Truth you obtain gives you an additional dice to roll. You can continue searching for more, but run the risk of incurring more Doom or Catastrophes or Challenges as well, so there's a great risk to reward built-in to the system.

So far, I'd say this is my favorite solo rpg that I've tried, although that's hard to say, acknowledging that recency bias might be a big factor. I feel like it strikes a great balance between a traditional "game" and a journaling exercise. I will say I definitely enjoyed this experience more than most solo rpgs that end up being some form of "single player D&D with a GM emulating book."

8 disembodied skulls out of 10, would risk eternal torment for another shot at immortality. You can pick up a copy here.

Popular posts from this blog

March 10, 2019
Knave is a rules-lite tabletop rpg written by Ben Milton of Questing Beast  (and available here ). It's OSR compatible, incredibly easy to teach, and even easier to run. Between reading its seven-page rulebook, and rolling characters, you and your players will be dungeoneering and adventuring within minutes. For starters, it's a fairly standard d20+mod roll-over system (as in, roll higher than a target number). If you're experienced with Dungeons & Dragons 5e or Pathfinder , more than anything you're going to be spending more time unlearning  things than having to learn anything new. What I loved For being so lightweight, it's actually pretty hard to pick a feature that I love the most. Every mechanic and rule within the book has purpose and weight, and is balanced well within the system. Things just make sense. Each of its six traditional ability scores (Strength, Dexterity, Constitution, Intelligence, Wisdom, Charisma) share equal importance so there&#
4 comments
Read more

March 06, 2019
Knave is a great chassis of an rpg for modding and hacking, and it seems that the first thing that most game designers see is a need for class customization in an otherwise classless system. I'm no different. Here's a stab in the dark at trying to add a little more character customization. Knacks As characters level, they reveal themselves to either have obtained or show a natural knack for different aspects of dungeoneering. At levels 3, 6, and 9, instead of increasing three abilities by one point, they increase a single ability by one point and roll on one of the following tables. (I guess your players can pick one if they want, but rolling is usually more fun, and that's what matters).  Fighting       +1 boon on attack rolls        +1 boon on stunts        Deal damage equal to your Strength on a successful stunt       Ignore losing 1 point of quality on armor or extra damage when an attacker rolls a 20 (or you roll a 1 to defend).       When wielding tw
Post a Comment
Read more

Steal everything you see here.